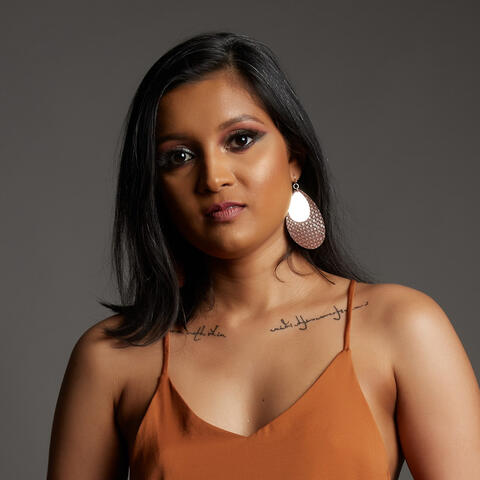 Keir Alekseii is an Associate Agent with Azantian Literary Agency. She is an educator and anti-GBV activist born and raised in Trinidad and Tobago, a twin island country in the West Indies. Keir is a writer, gamer, lover of folklore, and former research scientist. As a neurodivergent, queer woman of color, Keir is invested in discovering engaging work with similar representation, and passionate about creating space for voices not often recognized. She is especially interested in stories from BIPOC who are born and raised in the Global South.Keir still lives in T&T with her partner and five rambunctious felines who believe they are the best thing on Twitter, because they are.Scroll down to read her full MSWL, or view on the ALA website.

Keir is seeking YA & Adult SFF and YA contemporary. She is ONLY open to receiving queries from writers who identify as belonging to a marginalized or underrepresented group such as (but not limited to) BIPOC, LGBTQ+, immigrants, ND, folks who speak English as a second language, and DIS people.Her favorite traits and tropes include:
- Found family
- Protags that are too smart for their own good
- Stories about embracing your identity and finding your path
- Stories that center BIPOC and queer happiness
- Enemies to friends/unlikely friendships
- Nonbinary MCs tasting power and choosing chaos
- Grump & sunshine/stabby & cinnamon roll pairings
- Femme villains corrupting cinnamon rolls/himbos
- Non-white power couples/non-white love interests
- Sapphic everything
- Enemies to lovers & friends to lovers
- Slow burn & second chance romanceIn YA contemporary, she is looking for books in the vein of TJ POWAR HAS SOMETHING TO PROVE where the romance is secondary but identity and self-love are primary. Keir would also love work like ICEBREAKER, with queer love and found family.She has a fondness for disaster bi/pan characters, being one herself, and appreciates seeing diverse representations of queerness. She’d also love to read more books with nonbinary characters and love that runs deep even without a romantic element (yes, that means aro characters and stories with friendships that don’t turn romantic are welcome).In fantasy, she loves immersive worlds that pull her in from the first page, like THE DAEVABAD TRILOGY and particularly enjoys secondary worlds that are based outside of western cultures like THE JASMINE THRONE. You’ll be even more likely to catch her eye if you’re West Indian or West Indian diaspora, drawing from Caribbean culture and mythology. In general, Keir would love to see more fae books with BIPOC leads that use fae and folktales from non-western cultures, like TRESE.She particularly enjoys characters with strong internal conflicts, like in THE SUN SWORD SERIES and GEARBREAKERS, who wrangle with the consequences of others’ actions while fighting for (or maintaining) their autonomy. She also loves adult characters who must clean up generational messes, thereby healing from generational traumas or otherwise breaking cycles.Keir loves complex, smart, emotional characters that aren’t afraid to take on oppressive systems, like in KAIKEYI, and who find their voice and a purpose by the end of a story, like in RAYBEARER. She would love to see more books with unapologetic characters like in IRON WIDOW.Retellings or reimaginings with these characteristics are welcome, especially those which draw from underrepresented cultures.In science fiction, Keir is primarily interested in seeing SF settings that force us to explore the human condition, like the XUYA UNIVERSE or THE SPACE BETWEEN WORLDS. She also likes to keep it weird with works like SNOWCRASH and is always intrigued by how the alternate lives/worlds offered by gaming, virtual and augmented reality might inform our future. Though Keir’s SF tastes do lean toward Adult, she would welcome YA that explores these ideas and makes her crave adventure.Keir likes science fantasy as well, enjoying both the setting of sprawling space and powerful magic offered by WARHAMMER 40K, and the grounded, emotional connection provided by THE BROKEN EARTH TRILOGY.If you are sending her Adult SFF with a steamy element, Keir appreciates work that is kink- and poly-positive.Keir’s hobbies, background and identity also deeply inform what she loves. In general, you’re likely to catch her eye if:
- You’re burning down the patriarchy and/or destroying colonizers
- You’re reversing or reimagining colonialism
- You’ve got DnD or other TTRPG Easter eggs, or inside jokes for games like HADES, DEVIL MAY CRY, or FINAL FANTASY.
- Your story has the emotional resonance of games like GRIS or OLD MAN’S JOURNEY
- Your story has the political complexity and ethical realities of anime like GUNDAM or FULL METAL ALCHEMISTPlease include any content and trigger warnings in your query. 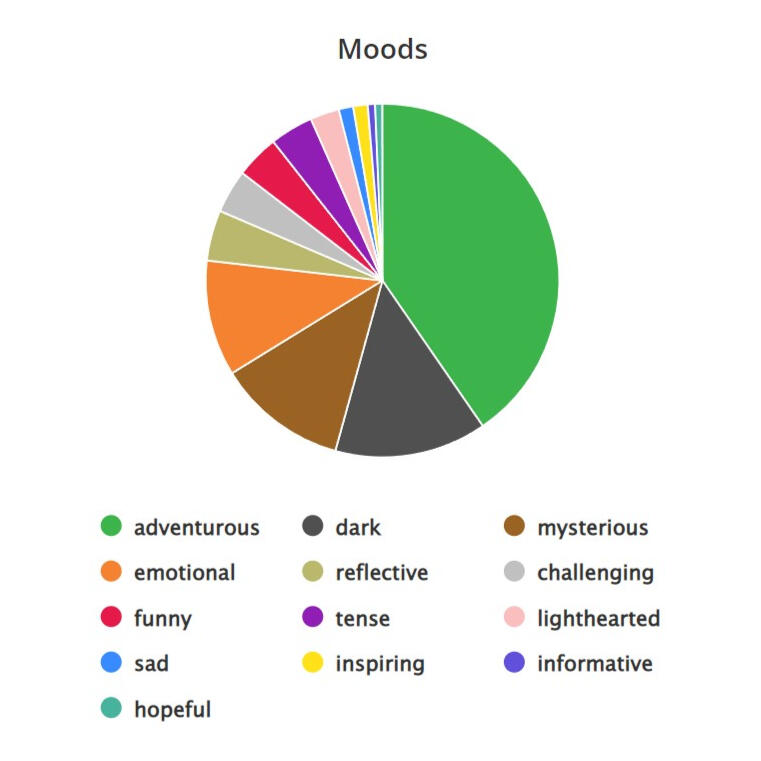 The majority of books read by Keir are adventurous, dark, mysterious, and emotional. Some books are also reflective, challenging, funny/ lighthearted, or tense. 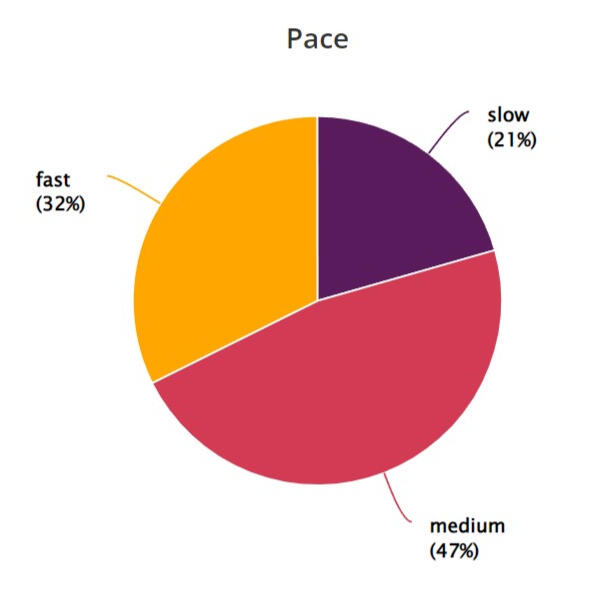 This information is from Keir's Storygraph reading stats for "All time" and is current as of May 3rd, 2022.

Synopsis for Star Wars, adapted from wiki how. Example begins on next line. LUKE SKYWALKER is at the market looking to buy droids on behalf of his uncle. Luke's father was a fighter pilot, and Luke dreams of pursuing the same career. He buys two droids and while cleaning the smaller droid, he triggers a holographic message. The message is from a beautiful young woman, PRINCESS LEIA ORGANA, and is intended for someone called OBI-WAN KENOBI. Luke knows an old hermit who lives nearby called BEN KENOBI, and he wonders if the two are related.Waking the next morning, Luke discovers that one droid, R2-D2 is missing. Setting out in his landspeeder, Luke and C-3PO go to look for him but are set upon by the hostile Sand People. The old man, Ben, rescues them and takes them back to his home. They see R2-D2, and Ben reveals that he is indeed Obi-Wan Kenobi and that the message is a plea from Princess Leia to deliver the plans of the Death Star, a planet killing spaceship, to her father in the hope that he can determine a weakness in the structure. Obi-Wan also reveals to Luke that not only did he know his father, Anakin, but they were both Jedi, an order of galactic peacekeepers murdered by the Emperor. Obi-Wan tells Luke that he must now learn the ways of the Force, the Jedi powers, himself. Luke says no but agrees to at least give Obi Wan a ride to a nearby spaceport, so that he can complete the mission form Leia. However, stopping at his own home on the way there, he discovers that his aunt and uncle have been murdered by Imperial Stormtroopers (a type of imperial police) searching for the droids.This changes things for Luke, and he now wishes to become a Jedi. At the space port, the two men and the droids meet HAN SOLO, captain of the Millennium Falcon, and a wookiee named CHEWBACCA, who is Han's first mate. Han is a smuggler with a bounty on his head, but he agrees to make the trip to Alderaan, where Obi-Wan can complete his mission. Just as they are about to leave, a legion of stormtroopers arrive, and the ship only just manages to escape.The Millennium Falcon arrives in the Alderaan system and discovers that the planet has been destroyed. Obi-Wan spots what he thinks is a moon, but they realize too late that this is the Death Star and their ship is caught in a tractor beam that pulls it into the gigantic space station. The crew escapes and, disguised as stormtroopers, Luke and Han rescue Princess Leia. Obi-Wan however is caught in a confrontation with DARTH VADER, the Emperor's henchman, and is killed.With plans in hand, the rebel forces launch their attack, with Luke newly installed as a pilot. Luke is to pilot his craft down a small shaft and fire a torpedo into a weak section of the structure. As he does so, however, he is pursued by Darth Vader and other Imperial fighters. Vader's craft is knocked off course by Han and Chewbacca in another ship and spins off into deep space. Luke's shot is successful, and the Death Star is destroyed.Some weeks later, in a grand ceremony, Princess Leia awards Luke and Han with medals for their efforts while still leaving Luke free to try to find another way to pursue training as a Jedi now that Obi-Wan is dead.